Excursion to the port of Rotterdam on 9 September 2014 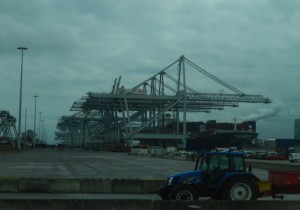 As we arrived in the city of Rotterdam, our first activity was to take part in a boat trip around the outskirts of the port area. The audio guide provided many interesting facts about the history and activity of the port and the most important companies and facilities as well. Furthermore we were given some information about the city in general.

Rotterdam is the largest port of transshipment for crude oil. Many different refineries, e.g. Shell or BP, are located in the port area and take up the biggest space of all the companies based in Rotterdam. A system of pipelines connects all refineries and facilitates the process of refining and distributing the oil. An interesting fact about the employees of the refinery, in this case BP, are obliged to park their cars in reverse and leave the key in the ignition to enable a fast escape in case of emergency.

In comparison to Hamburg, the port of Rotterdam covers a way larger area. During our bus trip around the port we drove approx. 40 kilometers. Still we couldn’t quite grasp the extent of the whole area – being accustomed to our rather compact and congested port of Hamburg. After all the port of Rotterdam is the biggest port of Europe in terms of area and total transshipments per year.

During the trip through the port we were able to see many container terminals and the completely automated process that manages the whole facility. Unmanned vehicles, called AGVs, that drive on magnetic lines and carry the discharged containers from alongside the ship to their designated location on the specific terminal until truck drivers arrive to continue the transport further on. The vehicles have to recharge their batteries after 10-12 hours and even this process is fully automated while employees only act as supervisors. In most cases the cranes that are responsible for the discharge of the ships are still controlled by human hand. After that we visited the Maasvlakte 2, a new port expansion which is still under construction. At an on-site exhibition we learned about the process of creating new ground that can be used for terminals and general port activity.

To further increase the handling of cargo and enlarge the port area millions of cubic meters of sand where sucked from the bottom of the ocean. Ships were equipped with vacuum-like machinery that distributes the sand to the new shore which is under construction. Below you can see an example of the process:

In conclusion, our trip to Rotterdam was very interesting and showed us one of the biggest projects in Europe to increase a port’s area. With measures such as these they made a big step forward to remain relevant in the global competition.

Excursion to the port of Antwerp on 10 September 2014

On Wednesday morning we arrived at the Lillo Port Center in Antwerp at about 10 o’clock. There we received a short introduction about the Port of Antwerp and its history.
Cargoes can be found on the Scheldt, the river through the port since the Middle Ages. And Antwerp has developed into a leading world port over the last five centuries. The port is 13,057 hectares large –or about 20,000 football fields and has got 6 locks in use, 25 bridges and 48 docks.

After the introduction we were given safety helmets and reflective vests, and went back to the bus with two Lillo port guides from the Lillo Port Center. This equipment was necessary for the visiting of the terminals. 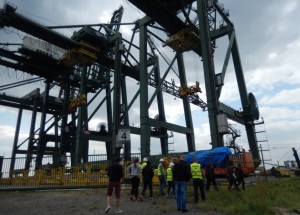 We drove through the port, that we could see the most important parts.
At the second biggest port of Europe you can find about 900 companies. This is, because almost all products we use in your day-to-day live have passed through the port. These products are for example televisions, clothing, food and liquids. The Port of Antwerp is not only the second biggest port of Europe, it also has the biggest fruit and coffee handling of Europe.

One stop was at a terminal, where we went through some of the warehouses and got some expressions about the different products and packagings. For example we saw big coils of wire which had a weight mostly over 1.5 tons. It was impossible to believe that these coils are so heavy that it takes over thirty minutes to load or unload them.

At the next stop we saw big gantry cranes which load and unload the containers. The biggest vessel which can be loaded and unloaded in the port has a length of 399 meters and 18,270 TEU.We also saw the biggest lock of the world, it is 500 meters long, 68 meters wide and 17.80 meters deep. So vessels, even bigger than the Panamax-Vessels can pass the lock.

At the end of our tour we had time to walk around Antwerp to get some more impressions of the city. All in all it was an impressive day and it is absolutely worth seeing. If we get the chance to go there again we would definitely take it.

On our last day, September 12th, we had the opportunity to visit FloraHolland. There we could see how flowers from the Netherlands and from all over the world are sold and distributed. We had to start very early, because most of the action takes place between 4 and 10 AM. Our guide gave us headsets which were connected to her microphone so we could listen to her everywhere. That was really good, because in some places it was really loud. Then she led us to the first hall where all the sold flowers where arranged on trolleys according to the orders of the buyers. Probably 500 employees work there every morning. They pick up the flowers at a central point and bring them to the trolleys of the buyers. Several trolleys are controlled by a supervisor. They get help from an electronic system which 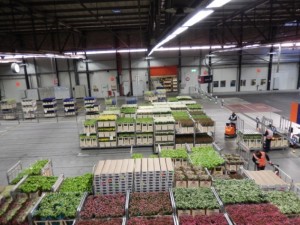 tells them which flowers to pick up and arrange. It tells them the flower and the aisle where to pick it up and the employee then just says “ok” and gets the flower, then the next and so on. They put the flowers on their trolleys and drive them with a one-man-vehicle.

The empty trolleys are collected at a certain point and then they are transported by a special lifting system to the other side of the hall, where they are filled with flowers again. This saves a lot of time. The system was custom-built in Germany especially for this flower plant.

We could also get inside one of the auction rooms. They are designed like a lecture hall so everybody has a good view at the front. The trolleys with the flowers are presented in the front. From time to time one or two employees take the flowers from the trolleys from time to time to show them to the buyers and let the customer know which flowers are on the auction at the moment. The trolleys drive automatically on a conveyor belt through the hall. 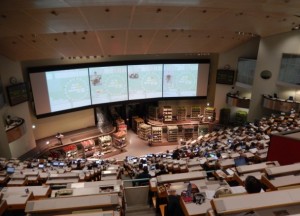 bove them is the auction clock. It shows all important information about the flowers: origin, quality, price, quantity per box, specifications such as quantity of blossoms. You can also see how many customers already bought the flower and how many are still available. Not all of the buyers sit directly in the auction hall. As long as you have a computer and login data you can get access to the auction from all over the world. You can buy over 20,000 different kinds of flowers at FloraHolland.

We also visited one of the cold storages. Normally all flowers are cooled down to 7°C except the roses, they are cooled down to 3°C. This keeps the flowers fresh. There are also other warehouses where flower shops can buy decoration articles, furniture and packaging.

Our guide told us that they have the largest turnover of flowers on Valentine’s Day, followed by Russian holidays, especially Women’s Day on March 8th. 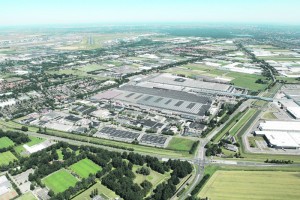 the tour very much because it gave us an interesting and unique insight into the Dutch flower sales and distribution. Our guide could give us a lot of precise and entertaining information. Especially the dimensions of the whole company FloraHolland surprised and impressed us very much. All the warehouses, storages, sales areas and distribution halls cover an unimaginable large area.